Not everyone is going to be accepting of the fact that Ninja Gaiden 3 exists without the assistance of former Team Ninja leader Tomonobu Itagaki. For the longest time, this producer defined what the hardcore ninja experience is supposed to be, and since his hasty departure from Tecmo Koei’s camp, many were wondering how the legendary Ryu Hayabusa would fare without him. Well, now that the game’s here, we can honestly say that, yes, it is a different venture for him, but that doesn’t mean it sucks. In fact, this ninja is still as sharp as ever, mind a slight misstep or two. 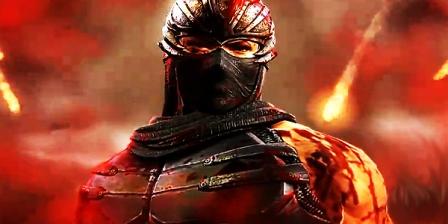 The third chapter follows Ryu as he carves his way through an enemy army, before coming face-to-mask with an evil alchemist who has a trick up his sleeve in the way of sorcery. Following a fierce battle, Ryu finds his arm infected with a strange demonic force. Desperate to get back to his normal self – and save the world in the process – Ryu sets out on his most difficult task yet, stopping this madman and his mutant army.

Yeah, the story goes off the rails at times, but that’s just part of the fun. One minute, Ryu finds himself in a test facility, facing off against mutating creatures and narrowly escaping death by jumping across chasms; the next, he comes face to face with a robotically enhanced T-Rex, charging at him from all directions and then, just when you think he’s disposed off, popping up again. This is probably the most lively we’ve seen the Ninja Gaiden series be, even if it’s slightly unbelievable.

To make the gameplay feel a little more fleshed out, Tecmo added a few things to the sequel. For instance, you can now climb up walls using your daggers, and while it takes a bit of practice (one hand needs to be firmly planted or you’ll lose grip), it’s an interesting new technique. You can also call upon occasional dragon ninpo to clear the screen in an explosion of brightly lit fire, or use your demon arm to cut some enemies to shreds in a hurry. There are quick-time events too, though they aren’t nearly as annoying as we’ve seen in previous games. In fact, some are pretty damn slick, particularly when you’re getting the jump on a surprising enemy, stabbing him without looking.

The controls retain the same hack and slash action we’ve gotten used to. While we’re a bit sad that you can’t chop off limbs like you could in Ninja Gaiden II, there’s still plenty of blood to spill, which is a good thing. And while things do get slightly repetitive (you’re stuck with the main sword at first, though more weapons are coming via DLC), it’s still quick, ninja-enabled fun, so if you’re a fan of that, it’s still intact.

Graphically, Ninja Gaiden 3 may not have evolved much from the previous game, but parts of it still look quite fantastic. Both the indoor and outdoor environments look great (particularly the dusty deserts of Saudi Arabia), and the animation is razor sharp, right down to Ryu’s cool little “ghosting” ability with some attacks. There are times the frame rate drops a bit when the combat gets somewhat heavy, but never to the point that it becomes lackluster. And the camera manages okay, though there are slight occasions it gets stuck behind a wall. No biggie. 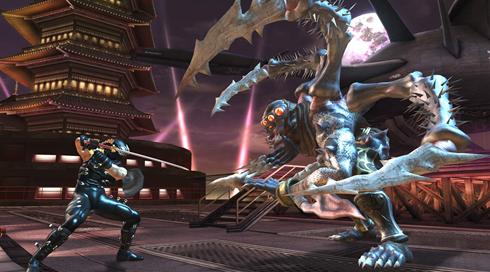 As for the dialogue, it’s acceptable. Not to say it’s not cheesy at times, as enemies repeat the same thing over and over (“Damn ninja!”) and the alchemist is a little too show-offish for his own good, but we’ve heard worse.

Along with a main story mode, which will take you a few hours (maybe longer on Hardcore difficulty), you also get some pretty good online content. A co-op mode has you team up with a fellow ninja for various Spec Ops-style missions, relying heavily on teamwork. There’s also a cool little four-on-four team deathmatch kind of mode, which may not be heavy on strategy, but still packs plenty of bloodshed. Nothing wrong with that.

So maybe Ninja Gaiden 3 doesn’t raise the bar like some fans may be expecting it to be, but overall, it’s still a worthwhile sequel, especially when it comes to its crazy boss battles (I'm telling you, that T-Rex is NUTS), great online compatibility and an above-average presentation. What it lacks in the “Itagaki touch”, it more than makes up for with some impressive “slice-and-dice”.